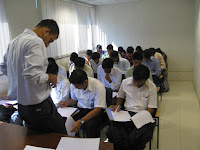 Yesterday we had the PGDSP entrance exam at KQ Infotech. Around 50% of the students who registered, attended the test.The test was pretty simple; we asked basic C, Data Structure and Operating System questions.After the written test we took interviews.

This was one of the opportunity for those who really want to do system programming or still looking for job. There was one guy who said that he will leave his current job and join the course. On the other hand there were few guys who have poor technical skills and having nothing in hand said *NO*. Ofcourse there might be several reasons taking such decisions, but they didn’t open the right door this time by taking such decision.

To be honest If I would have got this kind opportunity after finishing the B.E. , I would have been in different position right now.

I also took few interviews and one of the candidate asked me — “Why we are doing this for free as their is no cost. Is this some kind charity.” I told him that this isn’t some kind of charity, you will be paying for your training while working with us simultaneously.

This is just a new and very simple concept; unfortunately some still finds is difficult.

Anyways, we will be starting the classes from 2nd Feb, with all those who are selected and ready to join the course.We will be covering following topics:-