I got few registrations for Chennai last month but after announcing it on Chennai Linux User group, I got more registrations. I was looking for a community space to host the workshop as it was free one. Thanks to Shakthi, System Insights provided the space and sponsored the lunch as well. 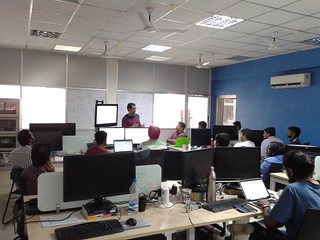 We scheduled half day workshop (9AM – 2 PM) as I later we planned to got to Linux User Group meeting, which got cancelled for some reason. Due to fog, my flight got delayed and I reached Chennai ~10 AM and started the workshop at 10:40 AM. Luckily no body left till then and because of the LUG meeting cancellation we could stretch upto 3 PM. I tried my best to cover full day workshop’s content in limited time. I hope the it was worth their waiting time.

Practical and useful #Docker tutorial workshop by @neependrahttps://t.co/tjfps59iod at @systeminsights

One of other feedback I got that I should cover more basics, on which I try to improve.

The workshop content was well organized and overall it was good. But there are few prospects for improvement. I strongly feel that there must be a Basic workshop for containers which just tries to make people understand the concept of containers from first principles. For example, it can start with explaining chroot and then proceed in an incremental and logical manner and arrive at the concept of containers.  Raashid Fatah, Embedded Software Engr. at Zilogic Systems

Next free one day workshops are scheduled in Hyderabad, Delhi, Kolkata and Virtual.  Also first two days paid workshop is scheduled Bangalore on 23rd – 24th Jan’16 and Pune one would be announced soon.