In July this year I came to know my tutorial session on Data and Network management for Docker containers has been selected for LinuxCon EU’15 at Dublin. This was significant achievement for me. Having a book on Docker under my name and doing some community activities, would have helped for sure. The conference was scheduled between 5th to 7th Oct’15 at Dublin, Ireland.

There were few announcement during the conference like Linux Foundation announced Real-Time Linux (RTL) Collaborative Project,  IBM launched of Linux servers based on OpenPOWER for big data workload. One should also checkout World without Linux video series.

I got to meet many folks from the Linux Community in the conference. I would cherish my meeting with Michael Kerrisk. Red Hat community had good presence at the event. We presented about Project Atomic, OpenShift, Gluster, Docker, Raspberry Pi and others. Joe Brockmeier  moderated a container panel in which we had speakers from Docker, CoreOS, Citrix and Red Hat.

In my opinion theme of this LinuxCon was ARM, Drones, IoT and containers. I attended talks on containers, IoT talks from IoTivity folks. Out of curiosity I even attended DroneCode developer workshop. Lots of of people who working in that field were there and listened to some interesting discussion. But the workshop of poorly organized with no clear direction. Most of the time just went in setting up environment.

I wanted to make my tutorial very interactive and participants should be able to use and share after the session.  With few iteration I narrowed down to following :-
– Vagrant for doing lab environment
– Jekyll for creating the pages
– asciinema for recording terminal
– GitHub Pages for hosting the content

the end-result is at
http://nkhare.github.io/data_and_network_containers/

I was happy to see the full house for my session and got some really good feedback as well. I came to Ireland few days before the conference and we went to road trip from Dublin to Kinvara, Cilffs of Moher and on way back to Dublin from Shannon we went to Bunrattny Castle. After we reached to Dublin back, we attended Oktoberfest as well. 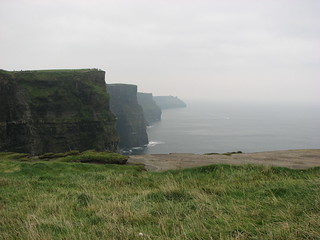 On one conference day LinuxCon team arranged for bicycle tour,  which I joined.  Official LinuxCon party was organized at  Guinness Storehouse on 7th Oct and there can not be a better way to say good-bye.