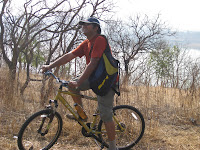 Last Sunday I went for around 45kms ride on my new bike .. TREK 3700, which I bought on last to last Sunday. I went with 100+ cycle enthusiasts.There is cycle group in Pune who go cycling regularly. Co-Incidentally I came to know about this group on the day, I bought my cycle.
I met Ulhas who manages the group at the shop, Surender Cycle Store.

I was not sure whether I will be able to ride this much in one day. So, on Saturday I came to Akshay’s house (Baner)
which is around 16km from my place(Viman Nagar) on my cycle. It took around 1:30 hours. Then I stayed at his place onlyas the place from where we need to start Sunday’s ride is near from his place comparatively.

On Sunday I started from Akshay’s house at 5:15 AM. I had to go near NULL stop.
While driving I was thinking that I am not yet ready for such a long ride and I should go back.So, I thought I should at-least go till the starting venue and will return from there.

While I was thinking this, a cyclist just passed me at very high speed.
At that time I decided that I will go for the full ride. I reached at the starting venue at righ 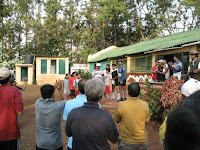 We have to cross Varje, NDA and Peacock Bay to reach our destination, which is the farm house of the cyclist.
I started with group of cyclists. Most of them went ahead of me. After Peacock Bay the ride was bit difficult.
We were going and going then one person who was standing on the road told us to take left to go farm house.And guess what .. we reached our destination. I didn’t believe that I did it. It was great.

Then we had the introduction and breakfast. There were 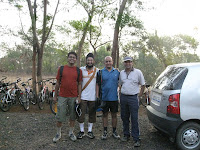 Doctors, CAs, S/W engineers, students.Some of the cyclist were 60+.I came to know that the cyclist who was passed while I was coming to starting point was the winner of Enduro3.

Then I talked to some of the folks there and headed back. I returned via Chandni Chawk.I reached back at 10:30 AM. I had a great time and will go for more rides.