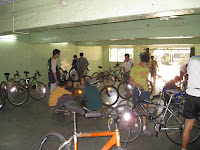 On 5th April we had a unique workshop called “GREASY FINGERS”. It was organised was the same group with whom I went for my previous ride. The programme was led by of Ashok Captain, He is great cycling personality of Pune. His energy level was awesome and the best thing which I liked about him was his talking style.

We started the workshop at around 8 AM. We all had to perform tasks on our own bikes. Ashok initially talked about basic Bike fit like seat height/ fore-aft position/ angle; handlebar etc.

The first task was to take off the front tyre and put it back. It was very easy on the bikes like mine as they have quick release. Second task was remove the tube from the front wheel 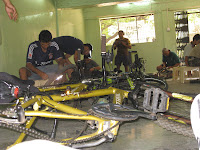 and look out for a possible puncture. All of us fixed the puncture on a sample tube. Last task was to take off the rear tyre and put it back. This was a bit tricky one as one has to take are of the gears. I took some time finish this one.

Though we had finish lot more stuff but it was already 12 noon. So we had to stop there but we’ll cover them in later workshops Then we had a competition.

Then I drove back to Viman Nagar from Deccan on my bike.. which was a real fun.